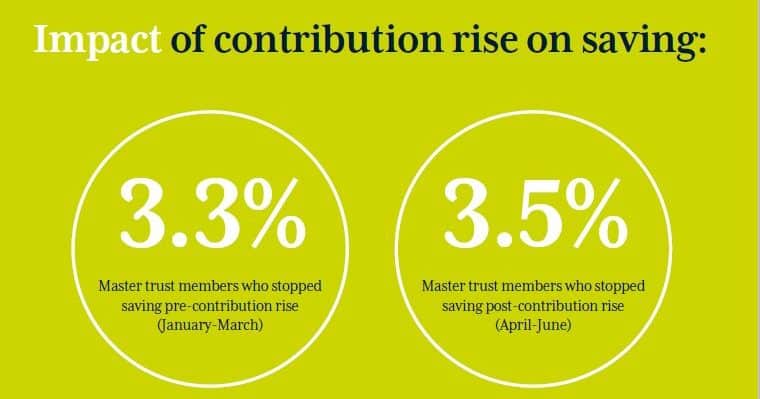 In April, auto enrolment minimum contributions increased from 2% of qualifying earnings to 5% as part of the phased roll out of the policy.

To put that in context, somebody earning £27,000 a year would have seen the amount they were paying into their pension go from around £17 every month to £52. But, at the same time, the amount their employer paid in also increased from £17 to £35.

Research we carried out just ahead of the increase suggested that 84% would carry on paying into their workplace pension after the increase but, in fact, many more have continued to save.

Encouraging figures released by the Pensions and Lifetime Savings Association for the three largest master trusts (that’s NOW: Pensions together with NEST and The People’s Pension) show the proportion of people who stopped contributing to their pension increased by just 0.2 of a percentage point in the months after April.

This means that for every 1,000 savers, just 35 a month have decided to stop saving.

But, there’s no room for complacency as in April 2019, contributions will rise again with members’ contributions going from 3% of qualifying earnings to 5% while employers increase from 2% to 3%.

The success of auto enrolment is reliant on savers remaining in their schemes and the government, providers and employers must continue to drive home the benefits of pension saving.

We’re still a long way from being able to confidently declare “job done”. But, for now at least, we can confidently say “so far so good!”