Home News and insights Why are part-time employees and multiple jobholders missing out on pension savings?

Why are part-time employees and multiple jobholders missing out on pension savings? 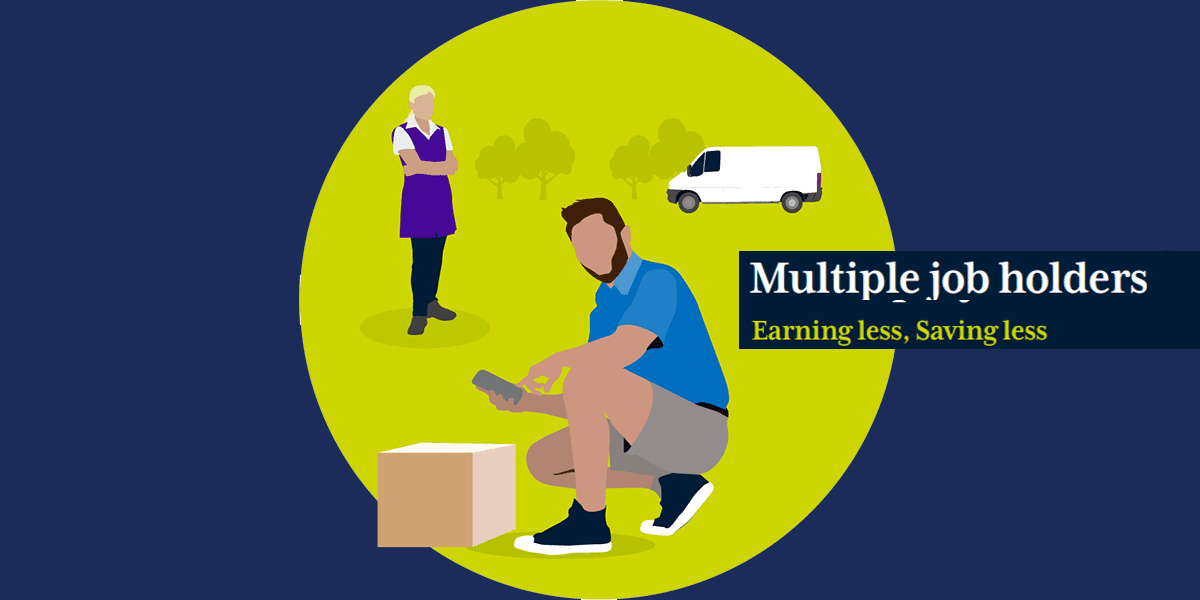 Our work patterns are changing. They’re becoming more flexible to suit our busy lives, meaning the nine-to-five job is no longer practical for many people.

Many employees now juggle multiple jobs to boost their income and to give themselves flexibility to take on commitments such as caring for children or family members.  And while this may give people more choice, the downside is that it disrupts the ability to plan and save for the long-term.

Pension pot by retirement is thousands of pounds worse off

Our latest research with the Pensions Policy Institute on the UK’s under-pensioned groups reveals that multiple jobholders, many of whom earn less than £10,000 per year in each job, miss out on pension saving. They build retirement savings of just £12,400 by the time they reach their sixties, compared to the UK average of £217,490. That’s 5.7% of the average.

Even when you take the State Pension into account, multiple job-holders still receive a pension income that’s 46% less than that of the average population – £210 a week compared with £390.

But why are multiple jobholders’ missing out on retirement saving?

Firstly, our research found that people who work multiple jobs earn 39% less than the average population (£16,750 in comparison to a UK average of £27,380). The less you earn, the less you can save, or contribute to a workplace pension.

Secondly, how auto enrolment pensions are triggered squeezes many part-time workers out of pension saving. Automatic contributions kick in when employees earn more than £10,000 per year in a single job. As multiple jobholders tend to work part-time in each of their roles, they may not earn the £10,000 minimum in any one role, so miss out on being auto enrolled – and employers’ contributions to their pension.

And even those individuals who earn more than the £10,000 threshold still miss potentially significant contributions from each job because of the qualifying earnings limit. This means instead of saving 8% into a pension, people who earn £10,000+ are only able to contribute 3.8% of that total figure because the first £6,240 of an employee’s income isn’t included in calculations for pension contributions.

Mike is a 33-year-old with one child and another on the way. Before Covid struck, he was a delivery driver during the day and a bartender by night. Lockdown means he can no longer work as a bartender, so he’s now delivering for local businesses in Leeds full-time.

He told us: “Before Covid-19, as a family we’d made enough money to live, but not to save. I was more focused on providing for the day-to-day and, while I occasionally thought about a rainy-day fund, I not only didn’t think about pensions but wasn’t aware that they were something I had to concern myself with. I assumed that when I reached a certain age the State Pension would be enough to see me through my old age.”

He’s now aware of these anomalies in the pension system and plans to start saving more for the family’s future.

So, how can we help part-timers and people with more than one job?

Find out more about our five-point policy proposal which will help bring 2.5m more people into pension savings. #Fairpensionsforall